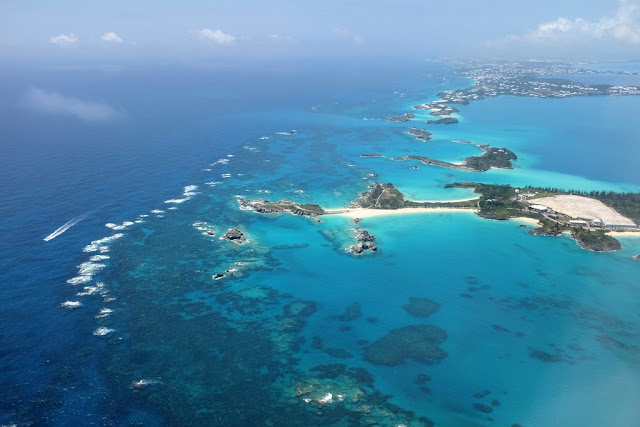 The Bermuda Triangle is said to be a mysterious extension of the ocean between Bermuda, Puerto Rico and Cape Florida, where over the years it has been engulfing a crowd of ignorant, unaware and dangerous ships and aircraft.
Numerous anecdotes have been said about the disappearances: aliens have captured humans for research.
Some geomagnetic storms confused the pilots’ navigation systems.
The lost continent, Atlantis, has pulled ships into its grip with a mysterious and unknown force.
Better yet, powerful whirlpools directly devoured victims and took them to another dimension.
But scientists have pointed out over the years that there are reasonable explanations for the disappearances, and that the risks of traveling through the Bermuda Triangle are no different from any other spots in the ocean.
A new life has been breathed into one such theory (ie, one theory has taken on a new dimension as follows): ships can easily be overcome by giant, unexpected rogue waves.
This hypothesis is not new, but a group of UK scientists have recently discussed evidence of extreme waves and other theories (including the role of human error) in a three-part documentary series, The Bermuda Triangle Mystery, produced by the BBC’s Channel 5.
According to the National Oceanic and Atmospheric Administration, extreme waves are steep and high, such as “walls of water,” often striking unexpectedly.
Storms can come from all directions, such as Mexico, the Equator and the Far East of the Atlantic.
If each wave can reach a height of more than 30 feet (10 meters), these waves can occasionally coincide at the right moment and create an extreme wave that can reach 100 feet-30 meters.
Engineers at the University of Southampton in England built some models of the ships, including one of the USS Cyclops, a ship that disappeared in the Bermuda Triangle in 1918 with more than 300 people on board.
They simulated extreme waves in a wave basin, and found that ships could actually sink quickly if they were hit.
The larger ship, the harder it is to stay floating.
Small ships can sink because of them, but sometimes they can ride this wave if they hit them. Large ships are designed to be supported in the front against one peak of the waves and in the rear against another peak when they are hit at two points.
Another theory relates to explosive methane bubbles, which, due to some disturbances, may float toward the surface of the water and cause the water to be less dense than the ship, sinking the ship. However, no experiment has so far been able to prove that this is possible
The disappearance of the famous flight 19 group – five US Navy aircraft that disappeared during a 1945 training mission – led a journalist in 1964 to give the area its current name, possibly because the crew strayed and fuel ran out.
About one third of registered and privately owned ocean ships in the United States are in the states and islands of the Bermuda Triangle
According to the latest 2016 Coast Guard figures, 82% of accidents in that area in that year involved people who had not received any formal training or experience of being at sea.
The ocean has always been a mysterious place for humans, and when the weather or navigation is bad, it can be a very deadly place.

One reply on “Bermuda Triangle: Pit of human faults?”